In early March, I scheduled a canoe trip along some of Tokyo's canals. The days before my trip were so cold and rainy that my friends laughed at my plan. However the day of the trip turned out to be just right for paddling.

The start of my journey was just north of the Higashi Ojima Train Station, which is a three span steel box girder bridge on oddly-shaped concrete piers over the Kyu Nakagawa (see photo above). Actually the bridge is just part of a long, elevated structure that carries the Toei Shinjuku subway line through Tokyo. The station was built in 1978. 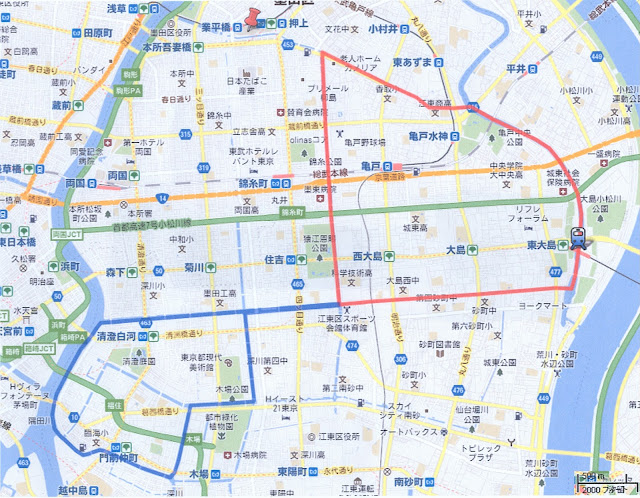 My friend Masanobu-san had arranged for us to paddle in a figure eight (the red and blue polygons on the map), which are ancient canals that go between the Sumidagawa and the Arakawa. Masa's plan turned out to be a little too ambitious as there was so much work on the canals that we had to portage around several construction sites and we were finally forced to turn around by a closed floodgate before we got very far west (along the blue polygon) on the Onagi-gawa. 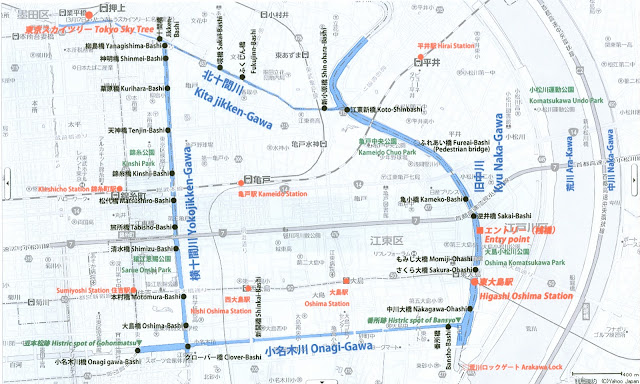 The map above shows the location of the Higashi Oshima Station south of the entry point for our journey. Over the next few days we'll study some of the bridges (and the history) along Tokyo's ancient canals.

Tokyo, Japan's Bridges: Higashi Ojima Eki Bridge over the Kyu Nakagawa (1) by Mark Yashinsky is licensed under a Creative Commons Attribution-NonCommercial-ShareAlike 3.0 United States License.
Posted by Mark Yashinsky at 10:43 AM