Unlike some bridge bloggers who maintain a secret identity, there is nothing anonymous about my blog. For instance, in the above photo I can be seen waving as we get ready to go paddling on the Kyu Nakagawa.

Masa-san who runs Paddlefreaks always takes a photo of me before we set out. He has the art of running an urban adventure company down to a science. All of his equipment fits on a dolly that he wheels to the nearest subway station. It doesn't matter if we paddle in a circle or just go downstream. In Tokyo there is always a subway station nearby.

Not only is Japan a very wet country but many portions of Tokyo are below sea level. All of the rivers and canals serve a single purpose, to drain the city before flooding can occur. 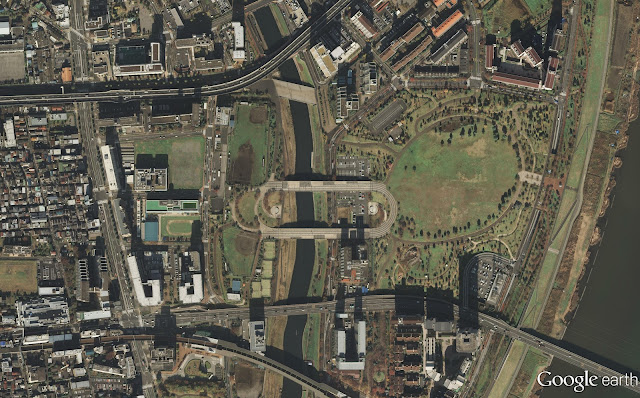 In the top photo I'm standing on a little boat launch. The Kyu Nagagawa goes north and south in the center of the Google Earth photo above (the Arakawa is on the east side of the photo). At the bottom of the photo is the Higashi Ojima Train Station Bridge that we studied yesterday. Continuing north is the Funabori Bridge (part of the same bridge we saw in my May 25th blog). North of that is a circular walkway that crosses the canal on the Sakura and Momiji Bridges. The boat launch is just north of the circular walkway. North of the boat launch are the five bridges that you can see behind me. The left and right Sakai Bridges are hard to see in the Google Earth photo because the Metropolitan Expressway Bridge (Route 7) is over it. Just north of that is the blue steel Kameko Bridge. I'm not sure what the name of the wide, three span bridge is just behind me. We'll get a closer look at all the bridges once we put the canoe in the water.