Tokyo, Japan's Bridges: Shirahige Bridge from the Deck of the Suijin Bridge

Looking back downstream at the Shirahige Bridge from the deck of the Suijin Bridge. Besides the bridge we also have a nice view of the Sky Tree Tower, The Metropolitan Elevated Expressway, the Riverside Sumida Central Tower, and the Tokyo Gas Tanks (sitting next to the Shirahige Jinja Temple). All of these big modern structures tend to dwarf and hide old Tokyo. You have to seek out and find the older parts of the city. Fortunately, Japan is very careful to preserve its past.

We are actually standing at what was the mouth of the enormous Tone River before civil engineers diverted most of the water to the east (starting at around 700 AD). As you can see on the map below, the east bank of the Sumida River was originally islands in Tokyo Bay. Where we are standing in the photo is called Suijin, the name of the water deity in the Shinto religion. 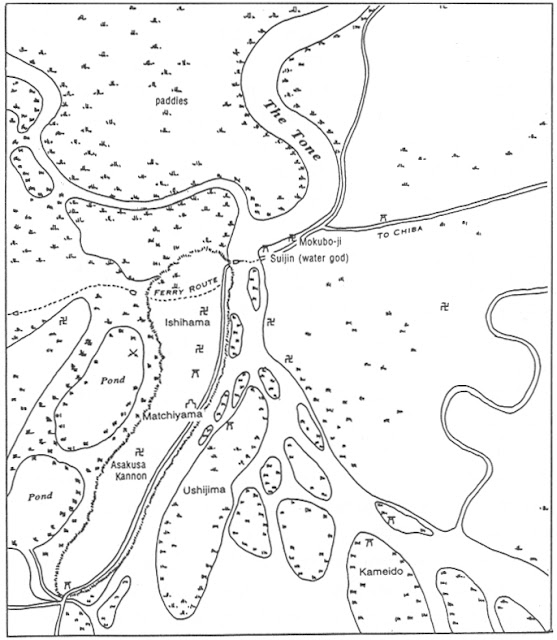 Tokyo, Japan's Bridges: Shirahige Bridge from the Deck of the Suijin Bridge by Mark Yashinsky is licensed under a Creative Commons Attribution-NonCommercial-ShareAlike 3.0 United States License.
Posted by Mark Yashinsky at 9:00 AM