The Confusion Hill Bridges are two structures that carry Highway 101 across the South Fork of the Eel River in Mendocino County. The bridges were designed and constructed to avoid a massive landslide on the south bank of the river.  The North Bridge (10 0299) was completed in July of 2009 and the South Bridge (10 0300) was completed in September 2009 and the bypass was opened in October of 2009. 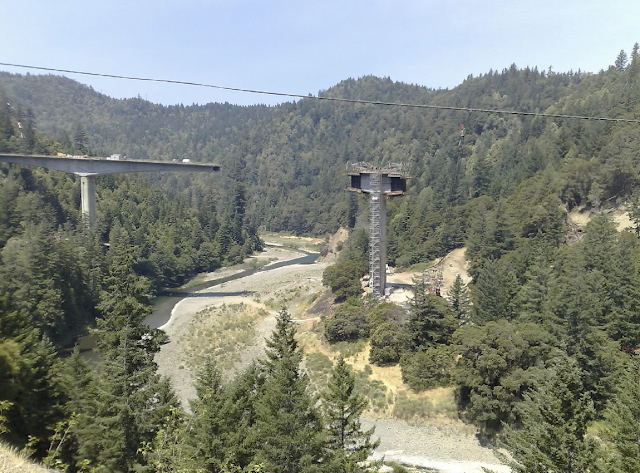 The South Bridge is a long three span continuous prestressed box girder bridge on vertical single column bents. It has a total length of 1239 ft (348 ft, 571 ft, 436 ft). It was built segmentally using cantilever construction (where the weight of the cured concrete supports the cantilevered spans).

Both bridges were designed by Caltrans engineers and built by Finley Engineering Group out of Tallahassee, Florida and by MCM Construction of California. 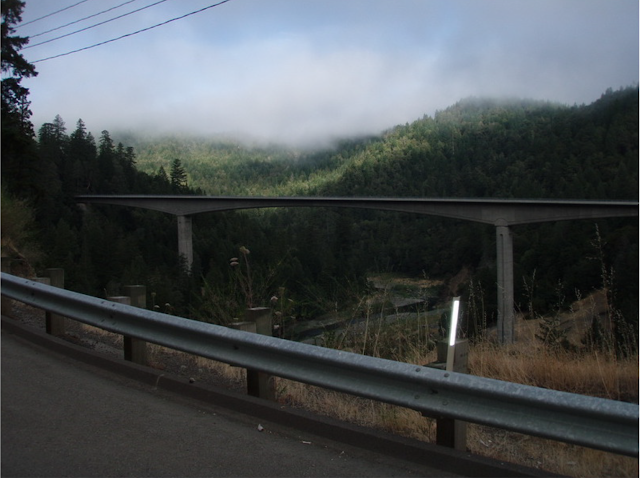 2 questions from an amateur.
1. What is the span of the North bridge?
2. Would it be proper to describe it as a "rigid frame" bridge?

Dear Bob,
The North Bridge has 3 spans of 176', 229', and 176' for a total length of 581'.
Your right, the diagonal columns result in large axial column loads when the structure is pushed longitudinally, resulting in a very rigid structure.
Mark Y