Continuing upstream along the Sacramento River we arrived at the Union Pacific Lakehead Bridge. As can be seen in the photo most of these bridges are connected to tunnels because the railroad was trying to keep the grade low while going through the mountains. 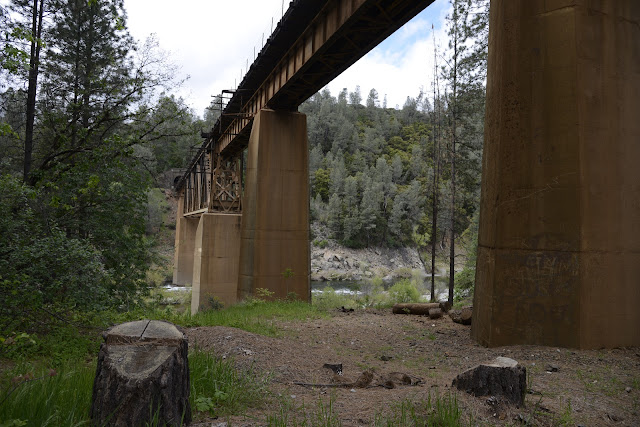 These railroad bridges have an odd hanger on the upstream side of the truss ends. Are they suppose to deflect debris away from the superstructure during flood stage? 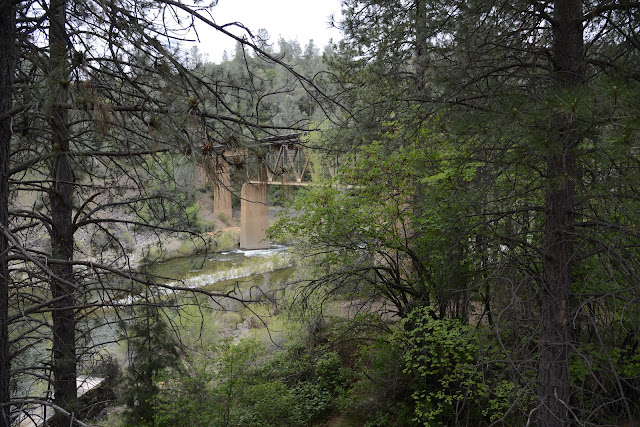 We must be far enough away from the Shasta Dam that a bridge can cross the Sacramento River with a single 200 ft span, instead of the three spans that are at Doney Creek, and the six spans that are required at Salt Creek.

Those "odd grates" look like telegraph line brackets to me - substituting for the crossbars on telegraph poles away from the river crossing. Functionally similar but structurally varying brackets are visible in other of your railway bridge photos.

Yes, the brackets held the code line for the centralized traffic control system used to direct rail traffic. I believe the information needed to operate the signals is now transmitted by satellite.

The open space under the girder span was once occupied by the original railroad bridge over the Sacramento at this location. The line change for Shasta Dam began to the north near Dog Creek. After the new line opened, the original bridge was removed.

Thanks to Alan and Greg for your valuable observations.
Most of the comments on my blog seem to come from railroad bridge aficionados!
Mark Y