The North Fork of Dry Creek crosses back onto the south side of Fiddletown Road at this old arch bridge in the middle of Fiddletown. This little bridge (26C0021) carries over 1200 vehicles a day driving at 25 miles an hour through this historic village. The bridge is only 33 ft long and 22 ft wide. The bridge has a sufficiency rating of only 15 out of 100 despite having a 'Good' substructure rating. 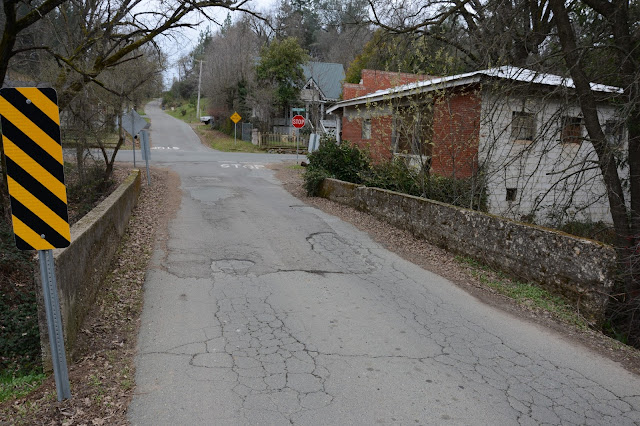 Most likely the poor rating is due to insufficient width and what appears to be a cracked concrete deck under the asphalt. The bridge is a closed spandrel arch bridge composed of masonry blocks. The barriers looks like they have been previously damaged and repaired.

Fiddletown was a gold mining town that was settled by Missourians in 1849. The town also had one of the largest Chinese communities in the state (over 2000 people). It got it's name because during the summer the creek 'dried up' and so the placer miners had nothing to do but 'fiddle' around. Today the town's population is only 235 people. The writer Bret Harte wrote a story 'An Episode of Fiddleton,' which gave the town some fame. Bret Harte, Mark Twain, and other writers followed the 'forty-niners' out west to write about their lives.

Amador County, California Bridges: Fiddletown Road Bridge across the North Fork of Dry Creek by Mark Yashinsky is licensed under a Creative Commons Attribution-NonCommercial-ShareAlike 3.0 United States License.
Posted by Mark Yashinsky at 9:00 AM