The next crossing over Dry Creek is a railway bridge, but I haven't figured out how to photograph it. There are no roads nearby and railroad companies can be sensitive about non-employees walking along their tracks.

The next highway bridge carries State Route 104 (Ione Michigan Bar Road) over Dry Creek. It is a three span concrete box girder bridge on two-column bents. It's a very ordinary looking bridge that was built in 2005. The superstructure is 202 ft long with a 79 ft long center span. Unlike the previous bridge this one is on a major collector route and carries about 2000 vehicles a day. It is 44 ft wide with two traffic lanes and wide shoulders. It's obviously a cast-in-place concrete bridge since you can still see the grain of the plywood forms on the exterior girder.

I wonder if they were able to complete construction in a single year? I noticed that two of the columns are in the creek, which sometimes results in a shorter construction season so as not to negatively impact the environment. I asked my wife (we met when she was an environmental planner at Caltrans) but she said Dry Creek (at least near the bridge) has no endangered species. 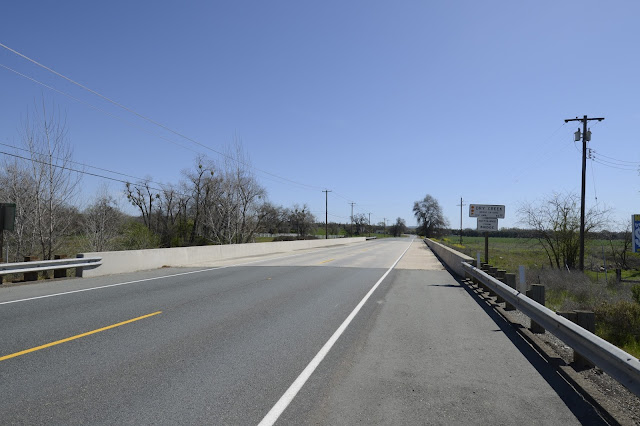