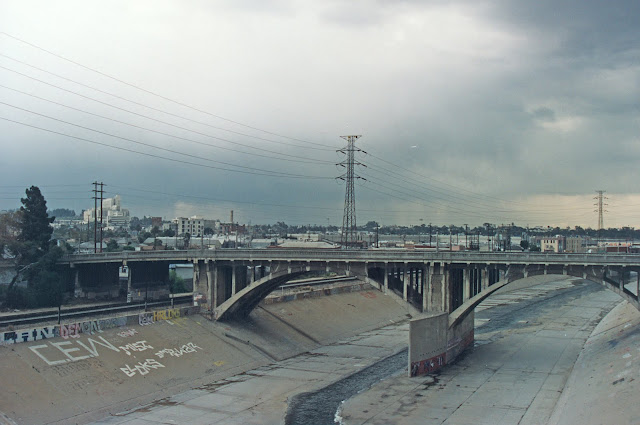 We looked at the Broadway Bridge (just north of this bridge) on February 19th. It's the most northern of the arch river crossings (except for the Hyperion Bridge in Glendale) and was built in 1910.

In 1874 the Downey Avenue Bridge (named after the governor) was built at this site. It was replaced in 1928 by the current North Spring Street Bridge. It is a long viaduct crossing over railroad tracks and city streets and includes a two-span, open spandrel, deck-arch across the Los Angeles River. It was strengthened in 1939, got a seismic retrofit in 1992, and was undamaged during the 1994 Northridge earthquake.

Note the huge cutwaters they put on both sides of the pier to protect it from debris that can be carried during floods. These walls provide a convenient location to paint graffiti as shown in the photo (you can see the North Broadway Bridge behind North Spring Street in the photo).