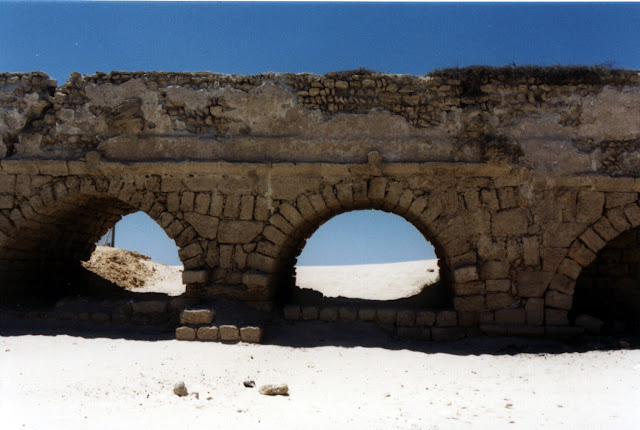 The Caesarea Aqueduct was built by King Herod to bring water to the city of Caesarea, which he had built to honor Emperor Augustus Caesar. The aqueduct was 10 km long and brought water south from Mount Carmel.
Caesarea became the capital of Palestine after the Romans razed Jerusalem, and maintenance of the aqueduct was taken over by the Roman army. A second aqueduct was added as the population grew. Stone tablets were places at intervals along the aqueduct announcing that the construction had been completed by the 10th Roman Legion.
The aqueduct was constructed by building stone pedestals to support a wooden form for the placement of voussoirs (the wedge shaped stones that form the arch). Once the keystone was in place, the form could be removed.  The area around the arches was then filled with rectangular stones and a channel was built on top, which can still be seen in this photo.
The aqueducts remained in service for around 1200 years until they fell into disrepair and were replaced by a canal. Today, portions of the aqueducts can be found along the Mediterranean, including at this popular beach east of the modern city of Caesarea. When I was there, Roman pottery shards and other ancient debris was still lying in the sand.