Not all the arch bridges built along Highway 1 in the 1930s were made of reinforced concrete. The Dolan Creek Bridge was a three-pinned arch designed with redwood timber members. The bridge was built by H.L. McCready and designed by T.K. May who took a model of the bridge to the 1939 World's Fair. 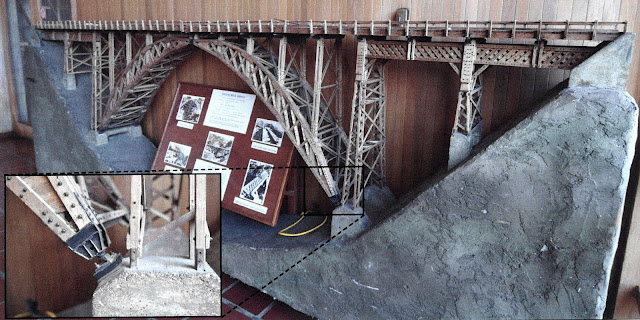 A photo of the bridge model (shown above) illustrates the shallow deck over the arch and the deep truss supporting the deck for the support spans. The arch span was 180 ft in length and over 150 ft tall. Note the well designed pin supports at the ends of the arch. This was one of the first timber bridges built by Caltrans that used metal ring connectors to transfer the load between the members (making the joints stronger than the members). The bridge sections were prefabricated in Monterey and then shipped to the site for assembly.

After about 30 years the bridge was the worse for wear and it was replaced by a concrete bridge in 1961. However, the bridge timbers are still being used in a Big Sur house that the architect Will Shaw had built in 1974.


Read more here: http://www.sanluisobispo.com/news/local/news-columns-blogs/photos-from-the-vault/article48044200.html#storylink=cpy
Posted by Mark Yashinsky at 9:00 AM