South of the Spanish Creek Highway Bridge the Feather River Railway Line splits in two. A single set of tracks goes through Tunnel #32 and then widens into two sets of tracks onto bridges over Spanish Creek.

The 'High Line' (built in 1931) goes to the north (to Bieber, California) where it connects to the Great Northern Railway (now the Burlington Northern Santa Fe Railway), which provides access to the Pacific Northwest. The main line continues west over the Sierras and to Salt Lake City, Utah. 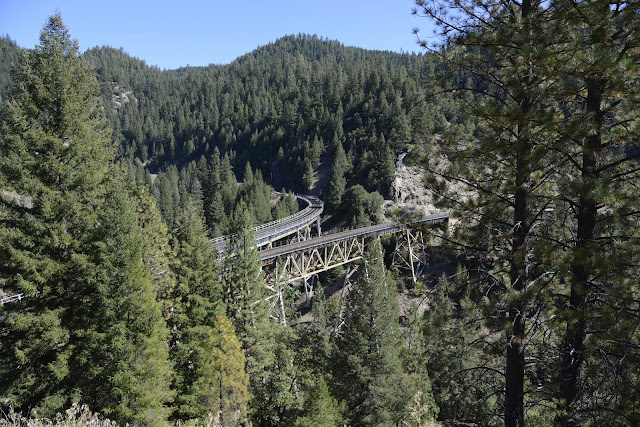 The two bridges making up the 'Keddie Wye' are deck plate girder bridges supported on towers with single deck truss spans over the creek. The mainline bridge was built at the same time as the railway in 1909 and the branch leg (creating the 'Wye') was built in 1931. Each of the two segments of the 'Wye' are about 500 ft long across the canyon formed by Spanish Creek.

The Keddie Wye was named after Arthur W. Keddie, a Scottish surveyor who marked out the route over Beckwourth Pass and convinced the Western Pacific Railroad to complete their railway line across it. He felt that going over Beckwourth Pass (at 5000 ft) would result in savings by avoiding all the snow at 7000 ft high Donner Pass. However, less snow meant more rain and rock falls that required constant maintenance.

Today, the town of Keddie is a favorite spot for railroad buffs to photograph trains over the Wye. Occasionally a train headed west will wait on the 'High Line' while a eastbound train crosses over the creek. Eric Blasko took the photo below of three locomotives pulling the Overland Mail East across the Keddie Wye (from the book 'The Feather River Canyon, Union Pacific's Heart of Stone,' written by Steve Schmollinger). This book has been a good source of information while writing about the bridges of Butte and Plumas Counties. 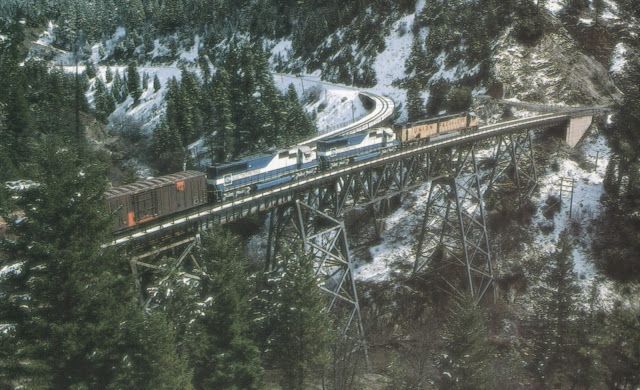 Plumas County, California Bridges: The Union Pacific 'Keddie Wye' across Spanish Creek by Mark Yashinsky is licensed under a Creative Commons Attribution-NonCommercial-NoDerivatives 4.0 International License.
Posted by Mark Yashinsky at 9:00 AM