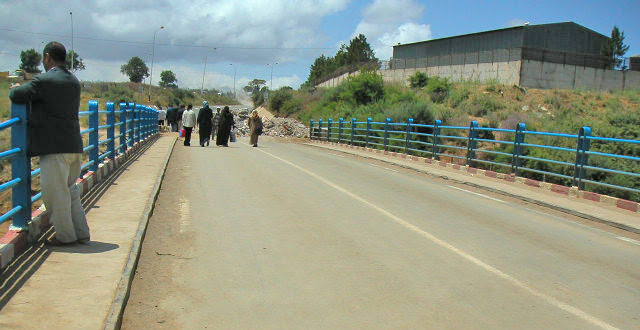 Another bridge (in Boumerdes) with blue steel railing but without guardrail.

I sometimes hear people in Muslim countries explain a bad situation by saying its 'God's will.' However, based on the recent demonstrations in North African countries, it is not preordained that people should live under a repressive government.

Over 1.5 million Algerians died getting rid of their French oppressors and so far about 150,000 have died trying to get rid of the current government.

Algeria's Bridges: Highway Bridge Railing in Boumerdes by Mark Yashinsky is licensed under a Creative Commons Attribution-NonCommercial-ShareAlike 3.0 United States License.
Posted by Mark Yashinsky at 2:54 AM