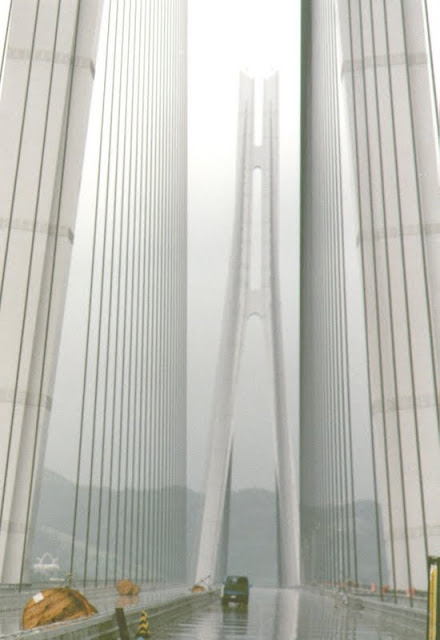 The Tatara Bridge was part of the project that linked the islands of Honshu and Shikoku with three expressways (the Akashi-Kaikyo Bridge was also part of this project). The project included 17 long-span bridges as well as many viaducts. The Tatara Bridge is part of the westernmost Nishiseto Expressway that includes nine long-span bridges and is 60 km in length. The Tatara Bridge has two, 220 meter tall steel towers. We rode up to the top in a special elevator that had wheels on its side to navigate the sloping bottom section of the tower. The deck carries two lanes of traffic in each direction along with pedestrian and bicycle lanes. Clearance below the deck is only 26 meters, preventing the Tatara Straits from being used as a shipping channel. The bridge has uneven side spans which resulted in using some reinforced concrete box girders to balance the weight. It was originally planned to be a suspension bridge, but was eventually changed to a cable-stayed bridge to reduce the environmental impact of excavating large anchorages into Ikuchijima and Ohmishima Islands.